NEO has been falling steadily since February 27, the price of Neo has fallen from $142 to $83. Although the whole market is currently down Neo is suffering due to a series of misfortunes that makes the future look bleak. 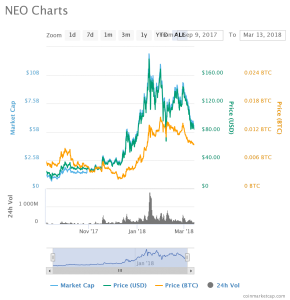 The problems are due to technical issues on NEOs network itself, it started with a faulty consensus node going offline and leaving the network hanging for some time. The problems did not stop there some users are reporting that some transactions are not being properly broadcasted and even getting lost on the way to the destination.

The issue is affecting the popular exchanges such as Binance and although Neo developers are assuring that the problem is fixed complaints are continuing to come in.

I believe the short to mid term affects will see Neo continue to fall with the long term up to Neo’s development team to fix the problems and for the rumoured partnerships of Neo to become fruitful.

For those looking to trade Etoro also allows you to “sell” Neo cryptocurrency which means you can make money if Neo falls in price. If you would like to practise copy trading or trading Cryptocurrencies on Etoro, you can sign up to a practise account with dummy funds so you can get familiar with the system before investing.